Day 16 and I've gone insane! At least my project has. This is a card that has one of my all time favorite Halloween pictures on it. The picture was taken several years back at a friend's Haunted House. We were all participants, and the theme was a Haunted Mental Institution.

My husband played the insane doctor who was carrying out cruel and unusual experiments on the patients. My second oldest daughter, who was about 6 at the time, played one of the residents, and let me tell you, they both were SCARY! My husband ran around talking crazy, being angry at the intruders, and sawing patients in half with a really loud jigsaw (bladeless, of course).

My daughter walked around creepily among the trees and asked the tourists if they wanted to play, then told them in a rhaspy voice with eyes wide "The ghosts like me, but they don't like you..." Scariest thing eva!!!!

I was the tour guide slash maid, and my oldest and her friends were some of the "tourists" that I led through the institute. Needless to say, we all had a blast! This picture was taken after the scaring was done, after we all came inside to have some food and talk about the best parts. When the camera came out, my husband posed and my daughter played right into it! Perfect picture! 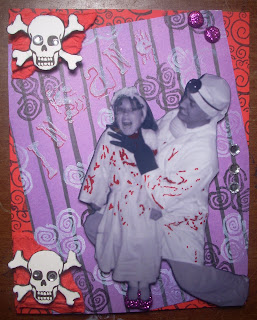 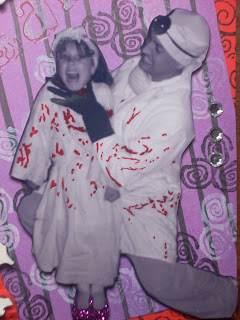 I used some swirly type images from both Invoke Arts and The Enchanted Gallery, and a retired collage alphabet from Stampin' Up. The skulls were cut out of a paper coaster that I received from fellow Bombshell Kas (thanks Kas!), and the striped background paper also came from Kas. I really scored with that gift! I hope you enjoy the card, for me it's a definite keeper!

So join me tomorrow for a very special sketch challenge sponsored by Prickley Pear! You'll have to tune in to get all the details, but you're gonna love it! See you tomorrow.
Posted by Unknown at 10/16/2009 12:01:00 AM