Before I get to my Thrilling Thursday projects, I'd like to thank everyone who posted comments on my Bombshell Hump Day Hop post! The video was really fun to make and I don't think it came out half bad. Right now I'd like to share with you a very special countdown, David Letterman style!

TOP 6 THINGS I LEARNED FROM WATCHING MY OWN TUTORIAL:

Number 6
Tilting your head to the side while you talk is totally cool!..

Number 5
Technology is not my friend...

Number 3
Never make video sections longer than 9.95 minutes long if you plan on uploading to YouTube...

Number 2
Filming a video on the same day that you plan on hacking up a lung is never a good idea...

...and the Number 1 thing I learned from watching my own tutorial is...
Eyelets and Brads are two separate things no matter how many times you use their names interchangeably.

If you can't laugh at yourself, right? Anyways, now on to today's post.

Sarah K, Miss September over at Bombshell Stamps, issued the September monthly challenge last week. The challenge is to make a project inspired by a movie. I already made one card inspired by the movie Rock N' Rolla, but thought I'd show a little more love for this challenge on Thrilling Thursday!

For these two card, I chose the movie Coraline. If you haven't seen it, it's a MUST SEE! Not just a kids movie! There is a scene in the movie where Coraline's neighbors, who happen to be ex-burlesque/vaudeville performers, put on a little show. They are respectively dressed as a mermaid and a pearl in a clam. To portray this, I decided to use several stamps from different Bombshell sets, including "Retro Cowgirls", "Mermaid Anchor","Mermaid Treasure", and "Homeward Bound". 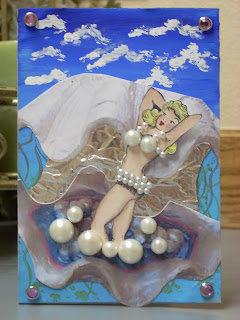 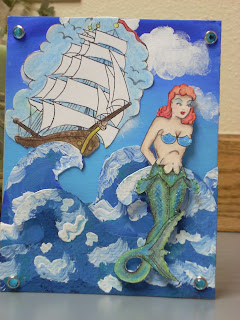 My original plan was to add red curtains on either side of the cards, but cards are only so big! So rather than crowd, I decided against it. I tried to make the backgrounds and waves look like hand-painted sets, and I think they came out pretty cool! I'd love to hear what you all think, so feel free to leave me a comment. You can upload your own challenge entry by visiting the Bombshell Stamps forum just click the link above. See you tomorrow!
Posted by Unknown at 9/17/2009 12:01:00 AM