Yikes! When I woke up I realized that my auto post for today did not post, so I apologize if you visited earlier and saw nothing here. Now I've got it all fixed and ready for you!

Today is our August Smeared and Smudged Member Blog Hop, and we have some amazing projects to share with you and new blogs for you to visit. If you don't know what Smeared and Smudged is, it's a network of like-minded stampers who just enjoy creating. We are a little kookey, a little edgy, but we embrace all types of rubber stamping and just have fun. Check us out if you get the chance.

Our theme for this month's hop was to create something with a hidden feature or that has to do with hiding. I had an experience the other day that kinda left a sour taste in my mouth, and it inspired my project.

I was at home making dinner when I heard a knock at the door. I opened it to reveal a man in some scruffy looking clothes who was selling meat off of a little white truck. He asked if I would be interested in buying some discounted meat because they had overstocked the truck, and after delivering to their regular customers, they had tons left over. He proceeded in saying they couldn't take it back to the warehouse because it, too, was overstocked, and he couldn't go home for the day until they sold the meat.

I politely told him no thank you, and he asked again, saying that he would sell it to me for $2, and it was a great price, wouldn't I like to just see it? I again said no, and let it slip that we were on a budget. He pushed again, saying "come on, it's only two dollars for steaks and chicken!".

By this time, my kids had opened the door and were digging in the front yard. While trying to gather them up, I again said no thanks, I really can't, which pissed him off. He walked away without saying anything directly to me (no thanks for your time, NOTHING!), stomped through my yard and mumbled under his breath about how he couldn't believe that I could not afford $2. Then, when he reached the van, he started talking to his buddy (who I didn't even know was there) and saying "I guess we're gonna have to go to some of the other neighbors, she can't afford $2!"

Needless to say, I was thoroughly offended. I felt violated, for lack of a better word, because he intruded on my happy peaceful family time with such a negative attitude, which rubbed off on me. And I also felt GUILTY, which I didn't need to feel, because I had MADE them keep working so late in the evening. Regardless of whether the meat was $2 or not, I was under no obligation to buy it, he came knocking on my door, I didn't go seek him out, right?

So, as I said before the REALLY LONG story, that was the inspiration for my project. 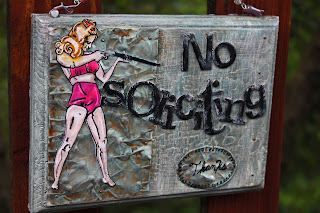 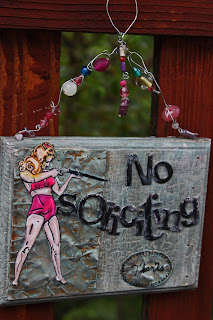 This is a door sign that I plan on putting right above my doorbell. I wanted it to be threatening in a non-threatening sort of way, basically warning any solicitors that if they ring my doorbell, the answer WILL be no. Really, if I want to buy something, I'll go to the store. The only exception (sometimes, depending on the budget) is children trying to raise money for their organization.

I used an image from the Smeared Ink Chicks Dig Guns set. The metal is actually a soda can, which I will be doing a tutorial on soon as per Kapree's request, and I added paint, nails, wire, and beading. The letters are painted chipboard. My coloring smeared a little when I added varnish, but that's okay, it still works.

This project is all about hiding from those darned door-to-door salespeople, and I hope you enjoyed looking at it!!

So now, head on down the hop list, and be sure to leave some love for our amazing S&S members!