Ok, today I'm sharing my third and final catch-up Bombshell Stamps project with you. Not to say there won't be more, these are just the three that I was able to get done this past weekend. I still have ALOT to go to be completely caught up and will share as I am able to.

Like I mentioned yesterday, this one may be my fave out of the three. I used the Growing Hearts stamp set for this one. 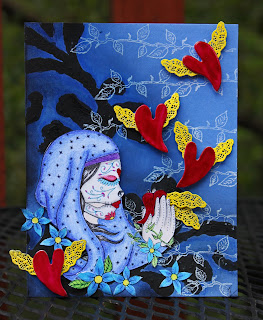 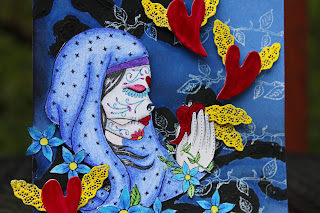 On the background of my card, I used a stencil and some black gesso to add some faint swirly images. Then I added some shading to make it look kinda like a night scene. I finished the background by stamping the vine image in white coming from the right edge.

My main image was stamped on white cardstock, colored with prismacolors, and cut out. I wanted most of the colors on her to be soft and faint, almost like moonlight was falling on her. Then I added bold color to the heart in her hand, her lips, and the heart on her forehead using nail polish. I added her to the bottom left of the card. Next I colored and cut out some flowers to surround her.

The rest of the hearts are leftovers from a die-cut that I used a while back. I had tons of the little hearts left over, and the swirly effect at the bottom of them matched perfectly with the heart in the image! I colored them with nail polish as well. I cut the wings from a metal piece that I had laying around (it's the same metal piece that I used for my Creationist spinner a while back), and added yellow embossing powder to them. Then I attached them to the back of my hearts, and added them to the card.

So, now you get the title! She's catching Heartflies in her midnight garden...or at least that's the visual I had. Does it make sense? I think this one's my fave cause it's kinda odd, it fits me. I wish I could go outside and catch heartflies, ha ha! I'd love to hear what you think.
Posted by Unknown at 7/21/2010 12:01:00 AM